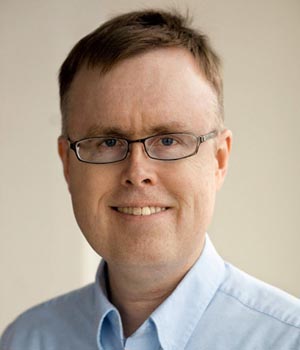 
"For pioneering studies of materials physics in spin-transport and related devices."


Dan Ralph is the F. R. Newman Professor of Physics at Cornell University and a member of the Kavli Institute at Cornell for Nanoscale Science. He received the 2022 James C. McGroddy Prize for New Materials for work with his long-time collaborator Bob Buhrman, who passed away in April 2021. Dan received a B.S. in physics and mathematics from Vanderbilt University, and a Ph.D. in experimental physics from Cornell University. After a postdoctoral appointment at Harvard University, he returned to Cornell as a faculty member. At Cornell, he has served as the Director of the Laboratory of Atomic and Solid State Physics, the Director of the Cornell Nanoscale Science & Technology Facility, and Chair of the Physics Department. His research has spanned magnetic devices, molecular electronics, and nanoscale superconductors, with a focus on utilization of electron spin. With Buhrman, he led experiments that demonstrated how spin currents can be used to apply torques to magnetization and manipulate thin-film magnetic devices much more efficiently than by applying magnetic fields. Dan has been the recipient of a National Science Foundation Graduate Fellowship, an Alfred P. Sloan Research Fellowship, the William L. McMillan Award in Condensed Matter Physics, a David and Lucile Packard Fellowship, and a Merrill Teaching Award, and is a Fellow of the American Physical Society.